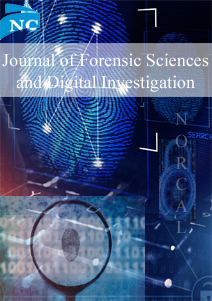 Palm prints and Fingerprints have been utilized a mean of identification by numerous scientists because of its nature; perpetual, unique and ubiquitous. In addition of being highly utilized for identification and substantiation of suspects, now a day, the researchers are focusing on palmar surface. Palmar surface covers the larger surface of hand and have higher chances to be implemented over the contacted surface area. The intensified palm prints play a vital role of identification and even provide the gender perception which is considered a crucial facet. This study was focused on determination of gender in which 400 samples (including 200 males and 200 female) were collected from an age group of 15-50 years from the population of western Uttar Pradesh. The ridge densities of intensified palm prints were studied by following an international procedure (25mm2). As a denouement, the procured mean ridge density, if ≤ 12 ridges/25 mm2 or less then is likely to be male origin, and 14 ≥ ridges/25 mm2 or more then that is likely to be from female origin. The obtained results of this study can be helpful to minimize the number of suspects list and nab them behind the bars.

Almost in every instance of crime investigation, identification of suspect relay on the various forms of evidences recovered from crime scene [1]. These evidences may be observed in physical, chemical or biological forms which provide the link between the suspect and victim involved in crime [2]. In 65% of cases, the palm prints and fingerprints are recovered in various forms i.e. latent form, patent, plastic are observed [3,4]. Due to the nature of ubiquitous, perpetual and exclusive, palm prints have their own significance in an investigation [5]. It has been considered that no two fingerprints or palm prints are similar in this universe and possibility of being is about 1.5 x 1019. It must be remembered that while writing or preparing the works of art, etc. one cannot help touching or holding the writing surface [6]. A part of the palm resting on the writing surface to give support and facilitating the movement of the hand. Since the Palm/ fingers have raised lines and furrows having sweat pores which keeps the ridges moist [7,8]. Hence as it touches the writing surface or objects, it is expected to leave their impressions of hypothenar area; the lower part of palmar area of palm in latent form on the writing surface or papers [9].

Since, sweat is a color less fluid, Therefore the prints left behind are not visible to the naked eyes. These types of prints are required careful intensification by using an appropriate method.  Since the contact of palm prints takes place in a partial form (only a portion), Hence, only a few of the ridges are recovered [10,11]. The identification can be established by analyzing the individual features between the disputed objects and exemplar. But if, the gender could be identified from the ridge density of the latent palm prints, it will be a milestone in the field of investigation to minimizing the number of suspects [12]. This study was carried out to determine the gender from the ridge density of hypothenar area of palm print by following the international standard procedure of 25mm2. As a denouement of this work, it was observed that the females tend to have higher number of ridge density in comparison of males [13]. The findings of this study suggest that the ridge density of hypothenar area of palm prints might be helpful for inferring the suspects of unknown origin [14]. However, the gender perception from ridge density may vary because of topological area, health of an individual, age, disease and temperature etc. We are looking to make a further comparative study by evaluating the samples from different topological areas and to check their significant level for an investigation.

For this present study, all the 400 samples including (200 male and 200 female) from age group of 18-50 years were selected from the population of Western Uttar Pradesh, North part of India. All the subjects for sampling were selected randomly and the consent was taken earlier. Samples were collected in January 2018 at approximate temperature 3-150 C, All the individuals were asked to write something/ to put signature on a white paper A-4 size sheet paper.  According to the mutual exchange principle, the latent palm prints or a part of hypothenar area was transferred on the white sheet. All the samples were treated by traditional and easily available battery of powder (black powder) and the intensified prints were used for further analysis.

For sample collection, the primary information about the subject whether they can put their sign on papers was confirmed. All the subjects were asked to sit at ease and then to write a sentence/ or to follow the standard letter/ to put the signature on a white A-4 size sheet with the help of blue ball point pen. During the sampling process, all the individuals were at calm and congenital

atmosphere. During the follow up of the procedure, it was expected that the author/individual will leave the latent palm impression of part their off on the surface of writing surface. By carefully handling, all the samples were kept at room temperature for 7-10 hours and then intensified. After the successful intensification, all the prints were preserved with the help of a 48mm diameter cello tape. Intensified palm prints or part their off were clear and were having enough information about the minutiae details of an individual.

The ridge counting was done by following standard procedure (25mm2) and from corner to corner of the print. The intensified palm prints were photographed by using by Oppo A5 smartphone of 16 megapixels camera. For the analysis of samples stereoscope including hand lens of 5x and 10x were used (Figure 1 and 2).

For tabulation and calculation, SPSS latest version 17.0 along with MS excel was used. To conclude the individuality of the suspect/individual, two-tailed fashion t-test was embedded in this study. kA hypothesis was set that for gender perception, as per this; H0: there is difference between the two genders based on ridge details of intensified palm prints and while Ha: there is no difference between two ganders based on ridge details of intensified palm prints. The likelihood ration (LR) was calculated to obtain the probability inferences of gender, based on ridge density values.  The likelihood ratio is based on Baye’s theorem [14,15].

When the statistical analysis was applied was applied in the ridges of both of genders, it was observed that ridge densities ranges from 11 ridges/ mm2 to 14ridges/ mm2 in male while it ranges from 12 ridges-16ridges/25 mm2 in female. The denouement shows that males have significantly lesser ridge density that female at p<0.001 significance level. Detailed information is given in table 2.

The combined mean of both of genders are 13.12±1.17 with a minor standard error 0.03 at an obtained t- value 23.74 at significance level p<0.001. The probability density and likelihood ratio of male and female was also calculated by using these values. During this observation, it was noticed that LR is very high for the 11ridges because not even a single female was found in this category and tends to decrease till 13 ridges. It drastically changes and increases from 14 ridges onwards. The details are shown in table 3.

Numerous studies have been conducted on the ridge density to determine the gender and any kind of genetic inheritance in ridge pattern. This study was conducted to broaden the area of palm prints and its utilization for gender discrimination from the ridge count similar like of fingerprints. The outcome if this study is utterly encouraging which can be helpful tool in the field of forensic investigation and restrict their field of minimizing the list of suspects of a specific gender. It proves that an increased ridge density in female gender rather than male gender because of less coarseness of ridges. This study of gender perception from intensified palm prints are highly significant at p<0.001. In some cases, if the female is mostly busy with watery work then tearing of ridges can be encountered and ridge count in a area can be increase (mostly the Palmar area), while the male who works in fields or a laborer; the ridges are found thicker.

During this study, it was also observed that an appropriate method and suitable method play a vital role for the intensification of impressions. A few of conventional application of developing methods can decrease the possibility of less damage. Once the sex of suspect will come to know from the latent palm prints or part then after taking specimen of the suspects; it would be easier for investigator to identify an individual (A methodology of finger mark research).

Palm prints, which are infallible by the nature because of its uniqueness and in 35% of cases are encountered at the scene of occurrence [16]. The present study was conducted with an attempt to describe the densities of intensified palm prints ridges and it has been successful for supporting the hypothesis that women tend to have a statistically significant greater ridge density than men. The results have showed that a ridge count of ≤12 ridges/25 mm2 is more likely to be of male origin and that of ≥14 ridges/25 mm2 is likely to be of female origin. It’s a milestone to accept evidences in court of law and to establish their relationship with the gender of suspect. Once the sexing could be done, then it’s become easier for the investigator nab the suspect.