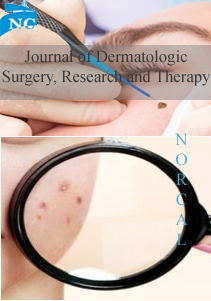 Background: Melanoma continues to be a devastating and costly cancer with very few effective therapeutic or preventive options.

Methods: Melanoma, melanocyte, epidermal keratinocyte, and fibroblast cells were exposed to various concentrations of oligopeptides or hydroquinone (HQ) for various times and cellular viability and proliferation were measured.

Results: Oligopeptides were found to be cytotoxic to mouse and human melanoma cells but not to primary human melanocytes, keratinocytes, or fibroblasts while HQ was broadly cytotoxic.

The incidence of malignant melanoma has been increasing at an alarming rate worldwide with over 96,000 new cases and 7,230 deaths expected in the US alone in 2019 [1], leading to direct costs of over $8 billion [2]. This does not include its incalculable psychosocial impact. Melanoma originates in melanocytes, most commonly in the skin. Ultraviolet radiation (UVR) exposure appears to be the greatest melanoma risk factor through pleiotropic mechanisms including suppression of the skin immune system, induction of melanocyte cell division, free radical production, and damage of melanocyte DNA [3]. Other risk factors include history of sunburn, xeroderma pigmentosum, and tanning bed us [4-8]. Twenty-five percent of melanoma occurs in conjunction with a preexisting nevus [9-11]. Treatment of melanoma depends on early recognition of superficial tumors, highlighting the importance of early detection and the need more efficacious therapeutic options.

Over the past decade, improved knowledge of the mitogen-activated protein kinase (MAPK) pathway and its implication in cancer development has led to attempts to target mutated forms of oncogenic kinases such as B-RAF, extracellular-signal-regulated kinases (ERK), and MAPK/ERK kinase (MEK) [12]. B-RAF is a member of the RAF kinase family, which acts in the MAPK/ERK signaling pathway responsible for regulating cellular proliferation, differentiation, and survival. Of the three RAF kinases (A-RAF, B-RAF and C-RAF), only B-RAF is frequently mutated in various cancers [12]. A single base missense substitution (T to A at nucleotide 1,799), that changes valine to glutamic acid at codon 600 (V600E) in exon 15, accounts for 90% of all BRAF mutations within melanoma tumors [13]. The consequence of this mutation is a 500-fold increase in kinase activity relative to the wildtype form, leading to constitutive upregulation of ERK signaling and subsequent unregulated cell growth, cell transformation, and eventual tumor initiation [14,15]. More recently, the novel serine threonine kinase STK19 was characterized and implicated in melanomagenesis [16].

To date, there are no preventative treatments offered for high risk groups other than sun avoidance, application of physical sunscreens with SPF ≥ 30, and routine skin surveillance by a dermatologist. To meet this urgent unmet medical need, we screened a series of novel oligopeptides with high affinity for both kinases B-RAFV600E and C-RAF using molecular modeling in silico and compared them to the known kinase inhibitors sorafenib and PLX4032 [17-19]. Herein, we describe the identification of two oligopeptides, P5 and P14, with selective cytotoxic activity towards multiple melanoma cell lines in vitro.

Enzyme 3-D X-ray crystallography structures of wild type B-RAF (PDB ID: 1UWH, chain A), mutated B-RAFV600E (PDB ID: 3C4D, chain A) and C-RAF (PDB ID: 3LB7, chain A) were obtained from PDB. Oligopeptides were docked into the ATP binding pocket of each prospective enzyme using AutoDock version 4.2.2.1 and AutoDock Vina version 1.0.3 [20-22]. Enzymes were prepared for docking by replacing missing hydrogens, removing water, NO3+, and Ca2+ ions, adding Kollman charges, and computing Gasteiger charges using Swiss-PdbViewer version 4.0.1 and AutoDockTools version 1.5.4. Sorafenib and PLX4032 structures were obtained from the PubChem Compound Database [23]. Peptide ligands were created using PyMOL version 1.1 beta3 or Avogadro version 1.0.0 and saved as “.pdb” files. The ligands were then processed using the Dundee PRODRG2 server [24] and AutoDockTools to determine charges and torsions. Each peptide was allowed all possible torsions. The binding modes of these inhibitors to B-RAFV600E and C-RAF were analyzed through molecular docking to derive structure-activity relationships.

Proliferation rates were determined using a TACS® MTT Cell Proliferation Kit (R&D systems, Minneapolis, MN). Cells were seeded at 2.5 × 104/well in 96-well plates in a humidified atmosphere with 5% CO2 at 37 ºC. Twenty-four hours later, oligopeptides or HQ were added to the corresponding wells at varying concentrations (0.03, 0.1, 0.3,1 and 3 mM), and cultures were incubated for 72h. The remainder of the procedure was performed following the manufacturer’s protocol.

Cellular toxicity was measured using a trypan blue dye exclusion assay. Cells were cultured in 6-well plates at a density of 4 x 105 cells/well. Each well received a different concentration of oligopeptide or HQ (0.03, 0.1, 0.3, 1, and 3 mM). Plates were incubated at 37 °C in a humidified 5% CO2 chamber. After 24 h, an aliquot was taken, and cells counted using a hemocytometer. Cytotoxicity was measured according to the following formula:

# of cells in control well

The same procedure was repeated after 3 and 6 d of incubation.

P14 PLX4032 and sorafenib served as benchmarks for in silico screening of our internally generated oligopeptide library. The region (activation loop) encompassing the V600E mutation in B-RAF, which consequently induces the conformational change and hyperactivation of the kinase, is highlighted in green (Figure 2A & Figure 2B). Figure 2 also shows that despite the significant interaction similarities between oligopeptide P14 (Figure 2A) and PLX4032 (Figure 2B) with the ATP binding pocket, P14 demonstrated a closer interaction with the activation loop. P14 formed several hydrogen bonds, which in combination with hydrophobic interactions pulled it to within 2-3 Å from important residues in the ATP binding pocket (Figure 2C) versus 3-4 Å for PLX4032 (Figure 2D).

(Figure 3) illustrates the molecular docking interaction of P14 and sorafenib with the ATP binding pocket of C-RAF. P14 exhibited favorable conformations and enhanced binding to the catalytic pocket (Figure 3B) relative to that demonstrated by sorafenib (Figure 3A). This advantage is facilitated by favorable hydrogen bonding and hydrophobic interactions. Our preliminary molecular modeling data suggest that, relative to the 2 benchmarks sorafenib and PLX4032, the proposed oligopeptides possess comparable or improved affinity to both mutated B-RAF and wildtype C-RAF, justifying their further study as potential development candidates.

Cytotoxic effects of oligopeptides on human and mouse melanoma cells

We next performed MTT assays to test for oligopeptide effects on the viability and proliferation of mouse melanoma cells and human metastatic melanoma line previously shown to harbor the V600E BRAF mutation. Figure 4 shows that incubation for 3 d with 3 mM P5 or P14 resulted in 44% or 49% cell death, respectively, compared to 90% cytotoxicity for HQ after same period of incubation. Oligopeptide P15 showed only minor cytotoxic effects after a 3-d incubation.

Cytotoxicity effects of oligopeptides on human melanocytes, fibroblasts, and keratinocytes

The results observed in the MTT assay appeared consistent with our preliminary in silico modeling data. For example, P15 showed weak in silico binding when docked in the ATP pocket of either B-RAFV600E or C-RAF, and weak effects on the proliferation and viability of melanoma cells (Figure 4 & Figure 5). On the other hand, oligopeptides P5 and P14 showed free binding energies that were comparable with those of sorafenib and PLX4032.

Oligopeptides P5 and P14 are capable of selectively killing melanoma cells while exhibiting very little to no cytotoxic effects towards normal human melanocytes, keratinocytes, and fibroblasts which are the major constituents of skin. HQ on the other hand is a potent nonselective cytotoxic agent against many cell lines. We used HQ as a positive control because of its known cytotoxic effects against some cancer cell lines [25]. Oligopeptide P15 was used as a negative control to highlight the selectivity of P5 and P14 against melanoma cells and to validate the output of the in silico molecular modeling. P15 showed weak in silico binding when docked in the ATP pocket of either B-RAFV600E or C-RAF, and weak cytotoxicity for P15 (Figure 4 & Figure 5). On the other hand, oligopeptides P5 and P14 showed free binding energies that were comparable with those of sorafenib and PLX4032.

Our findings support the use of molecular modeling as a screening tool to identify oligopeptides with potential cytotoxic effects towards human metastatic melanoma lines in vitro. Unlike HQ, P5 and P14 exhibited selective cytotoxicity towards melanoma cells with minimal or no cytotoxic effects towards normal skin cells, specifically melanocytes, keratinocytes, and fibroblasts. MAPK inhibition has been shown to result in dephosphorylation of the pro-apoptotic Bcl-2 family members, Bad, and Bim. This, in turn, leads to activation of the caspase pathway, and ultimately, the demise of melanoma cells through the induction of apoptosis [26].

Although expectations were high when sorafenib, the first RAF kinase-targeting drug, reached clinical trials [27], initial studies in melanoma patients were disappointing and did not show the anticipated single agent efficacy. The problem with sorafenib and similar development candidates is their lack of specificity [28]. Furthermore, melanoma tumors harboring the BRAFV600E mutation were found to be resistant to sorafenib treatment, implying only tumors with low B-RAF activity were sensitive to the drug. This phenomenon has been attributed to dependence of these tumors on C-RAF for MEK activity and B-cell lymphoma 2-mediated cell survival [29]. Thus, since >90% of melanomas exhibit B-RAF hyperactivity, only a small percentage of tumors will respond to sorafenib. Interestingly, sorafenib was later shown to more potently inhibit C-RAF kinase.

Of equal significance is the discovery that inhibition of BRAFV600E increased levels of melanocyte differentiation antigens (MDAs), resulting in improved recognition by antigen-specific T lymphocytes [32]. This is supported by the finding that loss of antigen expression led to relapse after immunotherapy [33]. Melanocytic cells express a set of genes specific to that lineage. However, with respect to immunotherapy, several melanocytic gene products, including MART1 and gp100, have been directly shown to function as target antigens for cytotoxic T lymphocytes [34-36]. This has led some investigators to hypothesize that reduced MDA expression by melanoma cells facilitates evasion of tumor surveillance in vivo [37, 38]. Thus, blockade of MAPK signaling via a specific BRAFV600E inhibitor with subsequent elevation of MDA expression may hold great potential as an immunotherapeutic approach for advanced melanoma.

Based on our data and previous studies, we hypothesize that oligopeptide treatment enhances melanoma killing by inhibiting B-RAFV600E- and C-RAF-dependent MAPK signaling, leading to unopposed caspase activity and subsequent apoptosis. Additional effects include increasing MDA expression, resulting in the potential for improved recognition by MART1-specific and gp100-specific autologous T lymphocytes.

Moreover, and to help address the urgent need for an effective preventative treatment for melanoma, our approach would be to target high risk groups with a non-invasive and non-surgical prophylactic topical treatment formulated with P5 and/or P14. These oligopeptides may prove to be revolutionary, cost effective, and efficacious treatments for lesions spanning from precancerous (actinic keratosis, dysplastic nevi) to pre-malignant (melanoma in situ, squamous cell carcinoma in situ) to malignant or even metastatic stages. Prophylactic efficacy would be achieved through cytotoxic elimination of any damaged skin cells resulting from sunscreen slippage prior to transformation into dysplastic cells.

Anan Abu Ubeid assisted with manuscript preparation and technical execution of the experiments.