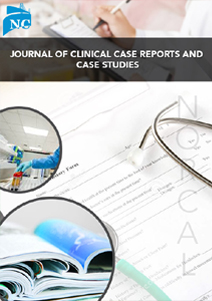 Cerebral Venous Thrombosis in a Pediatric Patient with Antithrombin Deficiency

Massive cerebral vein thrombosis in the context of antithrombin deficiency is an extremely rare but severe condition, even fatal. Here we describe an unusual case of a pediatric patient diagnosed of antithrombin deficiency that developed seizures and loss of consciousness in the context of extensive deep cerebral vein thrombosis. Anticoagulation therapy with heparin and antithrombin replacement are the first treatment options in acute phase. Endovascular thrombolysis with or without mechanical thrombectomy may be beneficial in patients with poor prognosis despite anticoagulation. Our patient is currently on long-term anticoagulation with vitamin K antagonists and remains asymptomatic.

Antithrombin (AT) deficiency can be inherited or acquired. Hereditary AT deficiency is an autosomal dominant condition with an estimated prevalence in the general population between 0.02 to 0.2%. A variety of acquired conditions may reduce AT activity like disseminated intravascular coagulation, liver disease, nephrotic syndrome, L-asparaginase treatment, heparin therapy and surgery [1,2]. Hereditary AT deficiency confers a high risk for thrombosis. The most common sites of thrombosis involving AT deficiency are the deep veins of the legs and pulmonary embolism. Thrombosis in atypical locations such as vena cava, cerebral or hepatic veins have been described. Limperger et al recruited 319 pediatric patients with thromboembolism, 21 (6.6%) had AT deficiency. Five patients developed a CVT. Mean age at first thrombotic event was 14 years. Slightly over half of the patients had an additional risk factor like prolonged immobilization or another inherited thrombophilia. Specifically, AT deficiency co-occurred with the factor V Leiden mutation in one and the prothrombin G20210A mutation in 2 children [3]. Non-provoked thrombosis is a usual clinical setting in almost 50% of patients. Anticoagulation therapy with heparin and AT replacement are the first treatment options in acute phase. Long-term anticoagulation with vitamin K antagonists is required [4].

Cerebral venous thrombosis (CVT) is a non-typical site for thrombosis. CVT affects mainly young adults and children. Women are affected three times more often than men [5]. Neurological symptoms are highly variable, ranging from headache to loss of consciousness. A wide variety of risk factors have been identified like head-neck infections, head trauma, cancer or hereditary thrombophilia [5]. The association between thrombophilia and CVT remains unclear [6]. Few studies reported an association between thrombophilia and worse functional outcome [7-10]. Just in case there is a previous personal or family history of venous thromboembolism or a CVT without a permanent risk factor (e.g. central venous catheter) or young age, the thrombophilia screening should be performed [5,6]. Anticoagulation therapy with heparin in acute phase is the treatment of choice for CVT. Anticoagulation should be maintained at least 3 months and depending on thrombotic risk recurrence, long-term therapy is mandatory [6].

Most patients have a good outcome under anticoagulation therapy. However, some patients experience a further neurological deterioration, then intravascular treatment, including pharmacological thrombolysis and/or mechanical thrombectomy are indicated [11]. Combined mechanical thrombectomy and urokinase infusion achieved a recanalization rate around 93% in 52 patients with severe CVT [12]. In the same way, Siddiqui et al included 185 patients undergoing mechanical thrombectomy, with a mean recanalization of 95% [13]. The main adverse side effect was intracranial hemorrhage that happened in 10% of the patients. Although deaths due to CVT have decreased in the past few decades, mortality remains around 5-10% [6].

We report a successful case in a pediatric patient with antithrombin deficiency and massive CVT requiring endovascular treatment.

A 5-year-old girl was admitted to a local hospital with sudden tetraparesis with light predominance in her right hemibody and Broca aphasia. No previous triggering factor was identified. Her medical records include type I hereditary AT deficiency (AT activity: 40%, AT antigen level: 45%), diagnosed 3 years before when family study was carried out (father and 2 aunts). Her younger cousin, also with AT deficiency, suffered from stroke 3 days after birth. No other thrombophilic defects were detected.

Upon admission in the Intensive Care Unit in our hospital, her vital signs were stable, with a blood pressure of 120/60 mmHg, a heart rate of 70 beats per minute and body temperature of 37 °C. She was alert, she could not speak but communication was possible throughout a wide range of facial expressions. A generalized paresis, especially in the right upper extremity was evident. Blood test, confirmed the AT deficiency (49% activity) by chromogenic substrate method. A mild microcytic anemia was observed (hemoglobin level of 99 g/L and mean corpuscular volume of 79 fl). All other tests, including hematological and biochemical parameters remained normal.

Initial contrast brain computed tomography (CT) revealed filling defects affecting internal cerebral veins, Galeno vein, inferior longitudinal sinus and left transverse sinus with extension to the left intern yugular vein, suggesting deep venous cerebral thrombosis. A bilateral thalamic hypodensity was documented, related to edema by venous infarct (Figure 1a). An external ventricular drainage catheter was inserted. Manitol was given as angioedema treatment. AT replacement plus enoxaparin at therapeutic dose (1 mg/kg twice per day) were immediately initiated. However, the intracranial pressure increased and neurological worsening was evident, presenting seizures and loss of consciousness. Orotracheal intubation was required, maintaining the vital signs. The CT demonstrated the previous massive CVT and microhemorrhages around the catheter (Figure 1b). Firstly, she received local infusion thrombolytic therapy with alteplase. A 4-Fr diagnostic catheter was used for accessing the left carotid artery through right common femoral access. Contrast material injections revealed an opacification of the deep venous system. Through the femoral route, a 6-Fr guiding catheter was introduced and contrast injection confirmed the massive venous thrombosis (Figure 2). Mechanic thrombectomy with micro guide and aspiration was performed, but a scarce effect was obtained due to the size of the microcatheter. Then, 4 mg of alteplase in bolus in sinus was injected, with a minimum recanalization of the deep venous system. A local continuous infusion of alteplase was maintained and the arterial catheter was retired. Twenty-four hours later, a repeated CT showed a reduction in the ventricular size, overall in the left lateral as well as the pericatheter hemorrhages. The angiogram, however, revealed no improved blood flow pattern. Mechanical thrombectomy revealed a partial recanalization and infusion with alteplase was maintained. AT replacement and enoxaparin 1 mg/ kg every 12 hours was given, reaching an AT activity of 100% and an anti-Xa activity in therapeutic range. The hemoglobin level was stable, around 100 g/L, not requiring blood transfusion. The patient experienced a gradual neurological improvement, associated to a radiological reduction and posterior resolution of the massive thrombosis and edema. The patient was doing well without any neurological symptoms and referred for outpatient follow-up. Oral anticoagulation with warfarin was started, reaching an optimal INR (international normalized ratio, between 2-3) in the next 3-4 days. The speech therapist and physiotherapist helped the patient recover. She is currently on anticoagulation and remains asymptomatic.

CVT is an uncommon but severe condition, more frequently affecting young people. Mortality range is between 5-10%. Case reports in early childhood could reflect multiple thrombophilic defects. The prevalence of AT deficiency in CVT is 3%. According to the European Stroke Organization guidelines, thrombophilia screening is not recommended to reduce outcome in patients with CVT [6].

AT deficiency is associated to the highest rate for venous thromboembolism compared to other inherited thrombophilic defects [14]. Di Minno et al documented that AT deficiency subjects had an odds ratio for thrombosis of 16.3 (95% CI 9.9-26.7), clearly higher than thrombosis due to other thrombophilic defects (OR: 5.37; 95% CI: 2.70-10.67; P<0.00001 for protein S and OR: 7.51, 95% CI: 3.21-17.52; P<0.00001 for protein C deficiency) [15]. More than half of the patients with AT deficiency develop an unprovoked venous thrombosis. Therefore, cardiovascular risk factors should be controlled to minimize thrombotic risk [4]. In our patient, no triggering factor has been associated with thrombosis. Of note, her younger cousin was diagnosed of AT deficiency, and developed a CVT 3 days after birth. Her father and 2 aunts have also the AT deficiency and no thrombotic events have been recorded. Her aunts referred no previous history of contraceptive pill intake and no miscarriages or thrombotic complications during pregnancies were described. However, LMWH was administered during the whole pregnancy and 40 days after delivery to prevent thrombotic complications. AT activity and antigen measurements in all family members are around 45-50%.

Heparin in acute phase is the treatment of choice. Long-term anticoagulation with vitamin K antagonist is recommended in inherited AT deficiency and thrombosis [16]. In addition, AT replacement may be adequate in acute venous thromboembolism, especially in unusually severe thrombosis, recurrent thrombosis despite an adequate anticoagulation and heparin resistance. Our patient was, consequently, the optimal candidate for both anticoagulation at therapeutic doses and AT replacement, due to the severity and atypical presentation.

Endovascular thrombolysis with or without mechanical thrombectomy may be beneficial in patients with scarce recanalization despite anticoagulant treatment with heparin and AT replacement, However, this is based on case series and not on controlled randomized trials [6]. Siddiqui et at included a systematic review of 185 patients undergoing mechanical thrombectomy, and a mean recanalization of 95% was obtained. However, AT deficiency and other inherited thrombophilia were not specified. These data were obtained from small retrospective studies [13]. Our patient required endovascular treatment followed by mechanical thrombectomy being finally successful despite the unfavorable prognosis.

Here, we presented an extremely rare case of a pediatric patient with a non-provoked CVT and inherited AT deficiency. This patient required endovascular thrombolysis and mechanical thrombectomy due to poor clinical response to anticoagulation treatment with enoxaparin and AT concentrates. The patient is currently asymptomatic, with a totally recovery of neurological manifestations and maintains long-term anticoagulation with vitamin K antagonists.