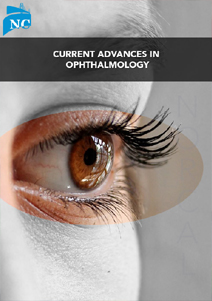 Scharioth et al., [15] reported a technique of sutureless intrascleral fixation of a 3-piece IOL in 2007. A sclerocorneal incision for IOL implantation was prepared. Two straight sclerotomies 1.5 to 2.0 mm from the limbus and two scleral tunnels about 50% scleral thickness, starting directly from sclerotomies were performed by a 24-gauge cannula. After the IOL inserted and the trailing haptic left outside temporarily, the haptics were grasped and pulled out through the sclerotomies by a 25-gauge forceps. Then the 25-gauge forceps was draw in the tunnel and pulled the haptic into the tunnel. No complications were detected during a 3-month follow-up of 5 cases [15]. Further studies showed postoperative complications happened within the first 4 weeks after surgery of 63 patients [16], such as smooth vitreous hemorrhage, iris capture of IOL and persistent IOP elevation. In Scharioth’s technique the sclerotomies and entrances of scleral tunnels for haptics were together, which makes the procedure of haptics pulled into the tunnels difficult and complex to operate. But this technique avoided the postoperative complications of transscleral suture fixation and enlightened other colleagues to develop more techniques of PC-IOL fixation for eyes without sufficient capsular support.

Agarwal et al., [17] introduced a sutureless intrascleral technique with scleral flaps and fibrin glue in 2008. Two partial-thickness limbal-based 2.5 mm × 3.0 mm scleral flaps are conducted. Two straight sclerotomies are prepared with a 22-gauge needle about 1.5 mm from the limbus under the scleral flaps. One was placed at the upper edge of flap and the other at lower edge of the flap. A scleral tunnel incision is then created for implanting a 3-piece IOL. While one hand was implanting the IOL, the other grasped and pulled out the leading haptic through the sclerotomy with a 25-gauge forceps. After both haptics pulled out and externalized under the scleral flaps, fibrin glue was applied to seal the haptics and flaps together, so was the conjunctiva. In this study, it is safer to pull out the leading haptic during the IOL being implanted than Scharioth’s method, as Agarwal’s method decreased the rate of IOL falling into vitreous cavity. Also Agarwal’s method simplified the operation by omitting performing scleral tunnels for haptics fixation and pulling the haptics into the tunnels. And the flaps were glued hermetically to avoid egress of fluid, thereby decreasing the postoperative complications of endophthalmitis [17,18]. Few postoperative complications were found of 10 eyes [17]. However a possibility of transmission of viral infections theoretically existed [19] and a large lamellar scleral flap was required. Further study of 210 glued IOL eyes conducted by Kumar et al., [20,21] revealed postoperative complications including decentration (1.97%), chronic macular edema (1.97%), optic capture (2.63%) and hyphema (1.31%) [20]. There is no endophthalmitis (0%) [20].

Yamane et al., [4] developed the technique of sutureless intrascleral PC-IOL fixation to be more operable and convenient in 2014. A sclerocorneal incision and 2 lamellar 1.5 mm  scleral dissections about 50% scleral thickness were performed 1.7 mm from the limbus. A 3-piece IOL was introduced into the anterior chamber and the trailing haptic was kept outside. A sclerotomy was conducted at the end of one lamellar scleral dissection with a 27-gauge needle. The leading haptic was guided into the lumen of the needle by a forceps and it was same to the trailing haptic. Both the haptics was pulled out through the sclerotomy by two needles. Two tunnels 2.0 mm were prepared with a 27-gauge needle at the terminal of the scleral dissection opposite the sclerotomies. At last haptics were inserted into the tunnels. The postoperative complications of 35 eyes included iris capture of the IOL (8.6%), transient ocular hypertension (5.7%), and cystoid macular edema (2.9%) [4]. It will be difficult to operate, when externalized the leading haptic before threading the trailing haptic into the lumen of the needle [22]. When sclerotomies and scleral tunnels are separated, there is more room for haptics pulled into the tunnels. But it is vulnerable for haptics when passed into the lumen of the needle [23], as you have to adjust the angle of the needle for haptics. There is another problem that it is not possible enough to keep the stability of the IOL, when inserting only 1.5 mm of the haptics into the scleral tunnel [24].

Ohta et al., [25] described a Y-fixation technique in 2014. Two Y-shaped incisions were performed 2.0 mm from the limbus and two sclerotomies prepared at the Y-shaped incision with a 24-gauge microvitreoretinal knife. Two scleral tunnels were conducted at the branching point of the Y-shaped incision. The procedure of IOL implantation and haptics pulled out was very similar to Agarwal’s method. Then the haptics were inserted into the tunnels. At last a suture was placed in the scleral bed to prevent the IOL shifting immediately after surgery, and the sclera is sutured. The postoperative complications of 44 eyes contained vitreous hemorrhage (6%), retinal detachment (2%), IOL dislocation and tilt (5%), and temporary IOP increase (2%) [25]. Ohta considered his technique to be stronger IOL fixation than others’, while others’ techniques didn’t show severe IOL dislocation and tilt [4,15,26,27]. More injury accompanied the Y-shaped incisions and suture perplexed the operation.

Takayama et al., [28] advanced the sutureless intrascleral technique without applying a wide conjunctival incision in 2015. A 3.0 mm sclerocorneal incision was prepared and a transconjunctival scleral incision was performed 1.5 mm from the limbus with a 22-G needle. The leading haptic was guided by a 24-G catheter needle. Then the same procedure was for the trailing haptic. A scleral tunnel conducted by a 30-G needle at the scleral incision and the tip of the needle was exposed from the sclera and conjunctiva. Then another 30-G needle was introduced into the tunnel at the tip of the first 30-G needle. The haptic was inserted into the lumen of the second needle and was guided into the tunnel. This procedure is performed for both the leading and trailing haptics. Complications of 12 eyes included vitreous haemorrhage (16.7%), and postoperative hypotony (8.3%), and iris capture (8.3%) [28]. Patients undergoing this technique would be more comfortable and conjunctival space would fulfilled fine conditions for glaucoma surgery in the future, although it is complicated to perform the method.

Various sutureless intrascleral PC-IOL fixation has been reported. In order to immobilize the haptics, scleral flaps and tunnels were conducted. Diverse means of preparing sclerostomies, ways of pulling out haptics and methods of introducing the haptics into tunnels were figured out. Good stability and few postoperative complications are in common. And we are expecting of longer term and follow-up studies.